Why only Catholicism and Mormonism: Pt. III- Why Apostolic Christianity? 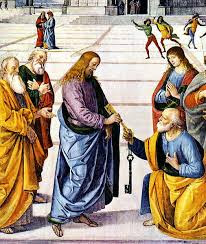 One of the most common objections to Christianity, and religion in general, stems from the multitude of different faith traditions, and worse still, subsequent divisions within these respective traditions. "If there is a God who loves us," the skeptic asks, "then why does he allow such division to persist?" The short answer to this is that man has free will. God grants us the liberty to make decisions that can lead us closer to, or further from the truth even when ignorance makes us unaware of our proximity to said truth. This is why, I maintain, it is of utmost importance for individuals to become informed, considering the arguments for both sides of an issue and attempting to set their biases aside (which I discuss briefly here). Having already discussed why I believe Christianity to be true above other faith traditions I now move to explain why I believe apostolic Christianity presents the best case for being the most true of denominational models. I will first consider historical evidence, and then the case for apostolic succession stemming from practicality method, including a brief argument for why the apostolic structure is reliable.

Apostolic succession is based upon the belief that Christ, along with establishing a Church, entrusted his disciples with a power or authority to act in his name. As Matthew 16:18-19 states:


18 And I say to thee: That thou art Peter; and upon this rock I will build my church, and the gates of hell shall not prevail against it.
19 And I will give to thee the keys of the kingdom of heaven. And whatsoever thou shalt bind upon earth, it shall be bound also in heaven: and whatsoever thou shalt loose upon earth, it shall be loosed also in heaven. (Douay-Rheims)

Even having established that Christ gave unto his apostles a special authority to forgive sins, cast out demons, proclaim the gospel, and the like, there remain several possible objections. I will here consider the following: 1) The apostles had a special authority, but did not pass it on to successors. Therefore, no apostolic succession. 2) The authority given by Christ to the original twelve disciples is an authority that belongs to all Christians. It is the priesthood of all believers, as it is often called.

1. An argument I have heard from both Mormon and Protestants is that Christ did indeed intend to establish a priesthood authority to guide his church that would be passed from generation to generation through the laying on of hands, but this authority ended with the apostles, or soon after. Because this objection does not deny the necessity of apostolic succession it is of no concern to us at this time and will be left for a future blog post in which I discuss whether there was a loss of apostolic succession and valid authority in the early Christian Church.

2. The idea of a priesthood of all believers is popular among many Protestant and Evangelical Christians, and also, though many are unaware, a doctrine recognized apostolic churches. The question,  then, is whether there exists also an ordained priesthood consisting of individuals who have received this authority from predecessors who too held this authority. While the Bible does not explicitly use the term "apostolic succession" or present lines of succession (unless you count the list of popes in the front of some Catholic bibles) I believe there is ample evidence in both the Old and New Testaments for this belief.

First, from the Old Testament, the entirety of Israel existed as a nation of priests, similar to the modern priesthood of all Christian believers. In addition, God established an exclusive priesthood that was limited to males in the tribe of Levi, with first Aaron, brother of Moses, and then his descendants fulfilling the role of High Priest (Exodus 28:1). This exclusive priesthood held the responsibility of carrying out special rituals those outside the Levitical priesthood were strictly forbidden to perform. (Numbers 18:1-7) This Levitical priesthood is similar to the structure of modern apostolic churches with ordained deacons, priests, and bishops, who are akin to the males of the tribe of Levi, while Christ now fulfills the role of High Priest. If God saw fit to have an exclusive, hierarchical priesthood prior to and during the Coming of Christ, it at least seems fitting that an exclusive, hierarchical priesthood would continue following his departure as well. However, because the covenant was fulfilled, and the temple in Jerusalem was destroyed, this priesthood would have to operate differently.

Various instances from the New Testament seem to suggest that this continuation did indeed take place. Along with the verses already mentioned above, Acts :25-26 provides the example of Matthias being called to replace Judas:

25 To take the place of this ministry and apostleship, from which Judas hath by transgression fallen, that he might go to his own place.
26 And they gave them lots, and the lot fell upon Matthias, and he was numbered with the eleven apostles.

In 1 Timothy 4:14 is presented the way in which the priesthood is given to those ordained: "Neglect not the grace that is in thee, which was given thee by prophesy, with imposition of the hands of the priesthood." In 1 Timothy 5:22, Paul councils Timothy, saying, "Impose not hands lightly upon any man, neither be partaker of other men's sins" alluding to the manner in which priestly authority is transmitted.

I think the best evidence of a hierarchical, exclusive priesthood existing in the New Testament is Titus 1:5-9, which reads as follows:

5 For this cause I left thee in Crete, that thou shouldest set in order the things that are wanting, and shouldest ordain priests in every city, as I also appointed thee:
6 If any be without crime, the husband of one wife, having faithful children, not accused of riot, or unruly.
7 For a bishop must be without crime, as the steward of God: not proud, not subject to anger, not given to wine, no striker, not greedy of filthy lucre:
8 But given to hospitality, gentle, sober, just, holy, continent:
9 Embracing that faithful word which is according to doctrine, that he may be able to exhort in sound doctrine, and to convince the gainsayers.

It seems clear in light of these verses that those who claim that apostolic succession and an exclusive priesthood have no basis in scripture are in the wrong.

For more reading on historical evidences for apostolic authority and succession I recommend the following links:

"The Priesthood Debate" by James Akin
Apostolic Authority and Succession


Apostolic authority and succession as practical and reliable

St. Augustine is quoted as stating "I would not believe in the Gospel, had not the authority of the Catholic Church already moved me", and yet many Christians today adhere to the doctrine of "sola scriptura," a belief that one needs only (or at least primarily) the bible to know the Christian truth, and relying on a perennial tradition or Church authority is at best a secondary concern. In light of the Protestant Reformation and the years that have followed, there seem to be two obvious problems with such a view. First, while these Christians claim to give much less adherence to a tradition of biblical interpretation, dialogue with such individuals reveals they have simply replaced one authoritative tradition with another. For example, a good friend of mine self identifies as a "Sola Scriptura, Sola Fide Christian." However, he manages to quote the biblical interpretations of James Denney and RC Sproul just as often as he does the verses of the Bible. Then there are those adherents of the so-called "New Perspective on Paul," for example, who interpret the New Testament letters in a way completely at odds with the traditional Reformed interpretation of my friend. How is it, then, that we can know whose interpretation of scripture, and whose deposit of truth in general, is the most correct? Further, how do we know which books should and shouldn't comprise scriptural canon?

There are only two ways in which the correct teaching and interpretation of scripture can be demonstrably known (by which I mean able to be known by a subject and then objectively demonstrated to third parties): 1) It must be possible to establish clearly through exegesis from scripture itself and argument that one interpretation of scripture is correct above others, or 2) There must be an entity independent of scripture that possesses the ability to correctly interpret, promote, and preserve truth. This entity, too, should be able to demonstrate that it does indeed have such an ability or authority. I believe Christian history shows clearly that the first is not a feasible option. The 500 years since the advent of the Protestant Reformation has yet to put forward a cut and dry case that puts to death all but the true interpretation of scripture that stands above all others. Thus there must be some other means by which truth is taught and maintained, if we hold that such truth can be known. While positing different ways by which this is accomplished, Catholics, Orthodox Christians, Anglicans, and Mormons all recognize the necessity of a continuing rule by which this truth can be proclaimed and preserved from error.

One may claim that one need only ask God directly which faith tradition is true, but how does such an individual answer those with opposing faiths who too claim to have discovered truth in the same way? One may claim that scripture itself shows us how it should be interpreted, but how does such an individual account for the various individuals adhering to the same rule who have arrived at different conclusions?

The model of apostolic succession, through which one receives authority from one who traces his priesthood back to God the Son Himself, appeals to sacred tradition along with scripture and reason, and in the case of the Roman Catholic and Mormon churches, possesses leaders that prevent the church from going into grave error seems the most reasonable of methods within Christendom for maintaining true doctrine. It has been shown that there are both historical evidences for such a model, and factors that make it seem practical.

I think it is of utmost importance for every Christian, regardless of denomination, creed, etc. to ask themselves why they believe their truth is superior to that of other self-identifying Christians.

For further reading on the problems of "Sola Scriptura" Christianity, I recommend the following links:

"The Practical Problems of Sola Scriptura" by Jimmy Akin

"The Church is "Generally Reliable"" by Devin Rose